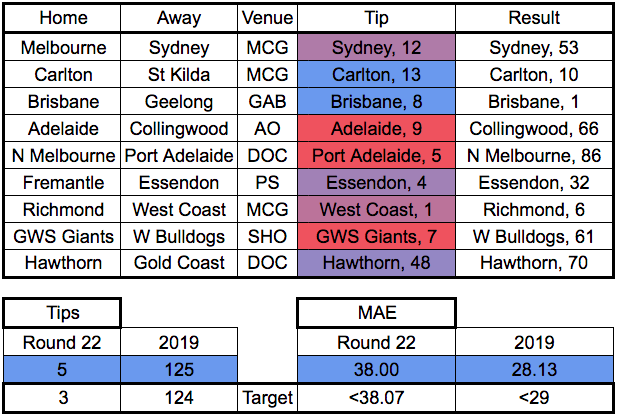 A pretty good round, all in all. It was a round with 8 50/50 games and one near certainty, so getting the expected 5 tips correct isn’t all that bad. My MAE managed to stay somewhat manageable, too.

I’m going off-topic, but did anyone else just start feeling really bad for Gold Coast from watching or watching highlights of their match against Gold Coast? Jarryd Roughead was dropped for not being good enough earlier this year and he walked all over them in his comeback match. Hawthorn fans were jokingly booing Hawthorn players who managed to get in the way of Roughy’s retirement party. It’s almost as if Gold Coast weren’t mentioned in any media reports on the match whatsoever.

Brisbane have claimed 1st place to be the 3rd team in 1st place in 3 weeks, and Hawthorn have drawn level with Geelong in the defence metric. Meanwhile, West Coast are now outright 1st in the attack metric.

The oddest looking thing in the ratings this week is the team in 5th. North Melbourne will play no part in finals this year. They are currently in 12th on the ladder and are 2 wins plus percentage outside the top 8 with 1 match remaining in the home & away season. However, the teams above them on the ladder have had a pretty bad lead-in to the finals. Essendon and GWS are the particularly noteworthy ones, recently suffering 2 huge losses to teams they should’ve at least been competitive against. As well as them, you have the South Australian teams, who looked certain to get at least one finals spot between them last week and are now in 10th and 11th. It’s been an odd end to the season.

Those reaching their highest ratings of the year this week:

Reaching their lowest ratings of the year this week:

View all posts by Statisticc